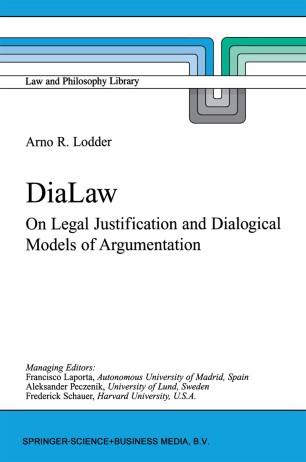 On Legal Justification and Dialogical Models of Argumentation

This book is a revised version of my dissertation 'DiaLaw - on legal th justification and dialog games' that I defended on June 5 1998 at the Universiteit Maastricht. The chapters 1, 4 & 5 (now: 1, 5 & 6) of my dissertation have remained largely unaltered. In chapter 2 I added explicitly the distinction between constructing legal justification and reconstructing it, and tried to elucidate the differences (and similarities) between the product and process of justification. Chapter 3 is divided into two chapters: one on the general characteristics of DiaLaw (now: chapter 3), and the other on specific, legal characteristics of DiaLaw (now: chapter 4). In order to improve readability, all rules in these chapters have been rewritten considerably. The section on the implementation of DiaLaw is moved to the appendix. In chapter 7 (the former chapter 6), a discussion of the notions 'procedural' and 'structural' arguments is added, and different layers in argumentation models are discussed. Finally, in chapter 8 (the former chapter 7) is added a recapitulation of my view on legal justification, and a discussion on the future use in legal practice of dialog models that represent argumentation in a natural way. The main thesis has remained unaltered: legal justification should be modeled as a procedural, dialogical model in which not only products of argumentation are allowed, but, even in formal models, rhetorical, psychological aspects of argument are dealt with.

`... merit of Lodder's book rather lies on the terrain of clarity of exposition and completeness... By its sober language and transparent but otherwise complete exposition I recommend the use...in graduate courses on AI & Law and legal argumentation.'
Artificial Intelligence and Law, 8 (2000)