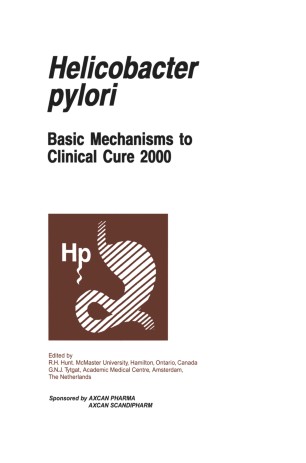 The fourth meeting in the very successful series Helicobacter pylori: Basic Mechanisms to Clinical Cure was held on the island of Bermuda in late March 2000. This was only some two years after the third meeting in San Diego and it seemed hardly possible that there would be so much new information. However, as the contributions in this volume testify, there was plenty of exciting new information with important implications for both understanding this infection and for clinical management. Some of this information was of a fundamental nature, such as the role of the acid­ sensitive urel channel in regulating the influx of urea and the formation of ammonia transported back in the microbial periplasmic space to neutralize acid; the observation of genetic polymorphism of the IL-1~ gene as an explanation of achlorhydria and gastric cancer risk in the first-degree relatives of gastric cancer patients; and the peculiar biochemical and physio­ logical consequences of the genome of the microorganisms. The format of the meeting, with short fifteen-minute state-of-the-art pre­ sentations by world experts closely involved in Helicobacter research fol­ lowed by ample time for panel discussions, was again followed this year. Traditional aspects included detailed study of the microbial characteristics, the novel Helicobacters, the interaction with the human host, the peculiarities of the inflammatory immune response, the short and long-term mucosal consequences, the effects on acid secretion, the problem of gastric malignancy and the therapeutic possibilities.

`This book provides an extensive compendium of information(with an index) on the recent developments in the broad range of investigations into H.pylori and its varions manifestations. It will be a valuable, up-to-date resource for gastroentelogists, microbiologists, and anyone interested in H.pylori.'
Helicobacter pylori: Basic Mechanisms to Clinical Cure 200 (2000)