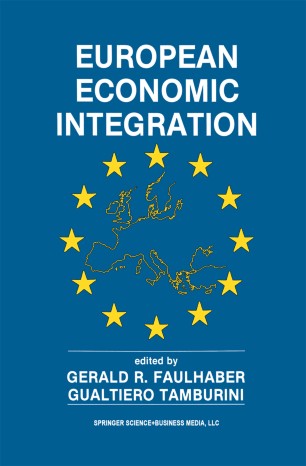 The Role of Technology

Gerald R. Faulhaber and Gualtiero Tamburini University of Pennsylvania and Universita Delgi Studi di Bologna This book brings together chapters by a group of European and North American economists, all of which focus on a single aspect of the ongoing plan for European economic integration -­ the role of technology. Indeed, the plan for European integration has many aspects social, institutional, and political. From a broad standpoint, the program approved by the 12 member states of the European Economic Community (Single European Act) in 1986 addresses these problems. Among other things, the Act pro vi des for the progressive establishment of a single internal market by 1992. At its most basic, this single European market means the unrestricted circulation of goods, people, services, and capital, unhindered by borders, tariffs, or restrictive national practices. The actual economic integration as planned by the Single Act will have a variety of consequences. On the whole, there will be the consolidation of the benefits already gained over the 2 Introduction previous 30 years due to the progressive lowering of tariff barriers within the Common Market. In particular, there has a been a shift away from Iimited national markets toward the wider market of the Community. In turn, this expansion of the market promises improved economies of scale and scope for many industries and a more efficient geographic allocation of production.