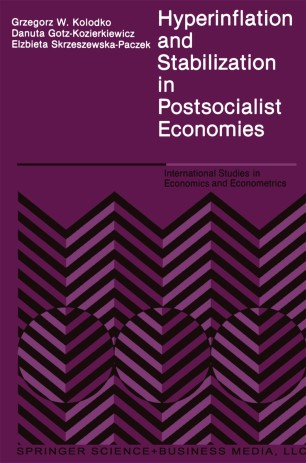 Hyperinflation and Stabilization in Postsocialist Economies

Part of the International Studies in Economics and Econometrics book series (ISEE, volume 26)

One would think states and peoples have had so many bad experiences with inflation that politicians at the helm of these states would do everything within their power to avoid inflation and, in particular, its very intensive shape, i. e. hyperinflation. However, this has not been the case. After the big inflations of the twenties and the post-war inflations of the fourties, we still witness intensive, economically, socially and politically extremely painful inflationary processes. And the eighties will be particularly engraved in history as a period in which the inflation has assumed an exceptionally dynamic character with respect to some countries. This regards, in the first place, Latin America, but not exclusively. Not without reason -as will be of particular intensity has also affected shown in this book -inflation countries which, according to the passed economic doctrine, were supposed to be completely immune from this economic illness. Most generally, the inflation can be assumed to be a uniform phenomenon which, in each case, can be described by a single, universal definition, while being divided into a number of forms and types distinguishable according to their original and secondary sources, their mechanisms, the ways of their manifestation as well as to their effects and the methods of counteracting them.