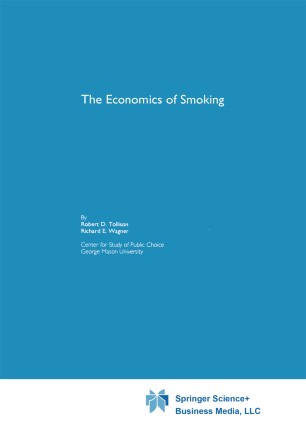 The Economics of Smoking

Cigarettes are under political attack at all_levels of government in the United States. From Washington, D. C. to state capitals to local govern­ ments, proposals abound to increase the cigarette excise tax, to impose smoking bans, to prevent cigarette advertising, to restrict the sale of cigarettes through vending machines, to cut off the export of cigarettes, to earmark the cigarette excise tax for health programs, to divest the stock of cigarette companies, and so on. And all of these are purportedly being advocated in the name of health. Undergirding and abetting the health argument is an economic argument that claims to place a value of up to $100 billion per year on the alleged health costs of smoking to the American economy, which is more than $3 per pack of cigarettes smoked. As our title suggests, our interest lies in the economics of smoking and not in the health issues surrounding smoking. We are professional economists and not medical scientists. We will focus on what, if any, economic consequences arise for nonsmokers when smokers smoke. For purposes of our discussion, we simply accept the premise that smoking damages health and proceed with our analysis. Since we have not studied the issue ourselves, we have no way of knowing whether such a premise is true. But it really does not matter for getting the economics of smoking right. The important point resides in who pays for whatever to smoking.