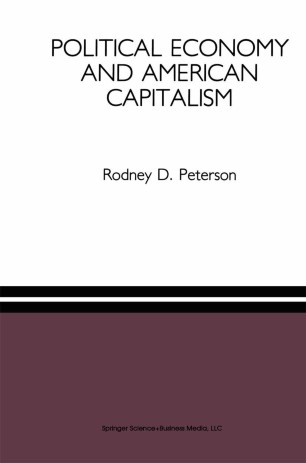 We are now witness to the waning years of the 1900s. Soon, we shall embark upon a bold journey into the uncharted territory of the twenty-first of various persuasions have speculated as to what the century. Futurists oncoming decades might bestow upon us. Not surprising, most predictions are closely tied to advances in technology, especially in astrophysiCS, biochemistry, electronics, and genetics. But what about the economic system? Whatever happens, forces have undoubtedly already been set in motion which will mold (or remold) the structure and character of American capitalism. American capitalism has been, is, and will undoubtedly continue to be a system in transition. Technology perennially changes, albeit at a faster or slower pace sometimes than others, and society's institutions continually adjust to these technological changes. Such adjustments alter the character of our politico-economic system when statutes are enacted, court decisions rendered, administrative agency rules promulgated, and cultural mores realigned to supplant old ones. Other adaptations are brought about when small-group collective action is successful in causing a special status of privilege to be conferred on some members of society, but restrictions to be levied on others.