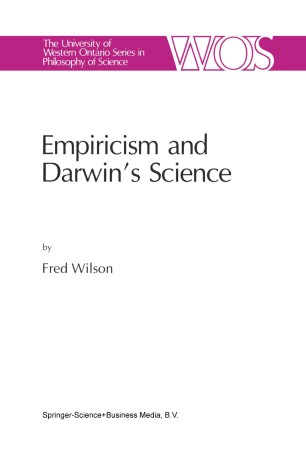 Part of the The University of Western Ontario Series in Philosophy of Science book series (WONS, volume 47)

I would like to record my thanks to Paul Thompson for useful conver­ sations over the years, and also to several generations of students who have helped me develop my ideas on biological theory and on Darwin. My wife has, as usual, been more than helpful; in particular she typed a good portion of the manuscript while I was on leave a few years ago, more now than I like to remember. My parents were both looking forward to holding a final copy of this book. I only regret that my mother did not live long enough to see its completion. I must also thank the publishers and their staff. They have been re­ markably patient about meeting deadlines - promises were repeatedly made and then, owing to family situations, had to be broken - and for this I am considerably in their debt. I would further like to thank the following authors and publishers for permission to use their work: R. C. Lewontin, The Genetic Basis of Evolutionary Change, Figure 1, p. 14; © 1964 Columbia University Press; reprinted here by kind permission of the author and publisher. F. Wilson, 'Goudge's Contribution to the Philosophy of Science', in L. W. Sumner, J. G. Slater, and F. Wilson (eds.), Pragmatism and Purpose: Essays in Honour of T. A. Goudge; © 1964 University of Toronto Press; reproduced here in part by kind permission of all the editors and the publisher.

`In conclusion, then, Empiricism and Darwin's Science should be on the shelves of all those who take an interest in the philosophy of biology and, in particular, of all those who wonder whether the foundations of biological science at the end of the twentieth century are as shaky as those of physics at the close of the nineteenth.' Annals of Human Biology, 20:1 (1993)
Buy options