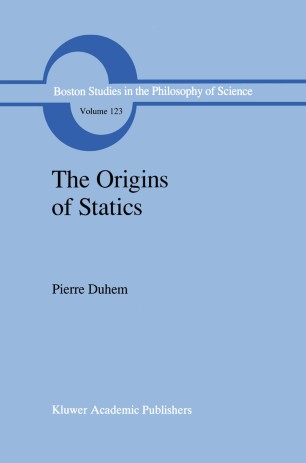 The Origins of Statics

The Sources of Physical Theory

Part of the Boston Studies in the Philosophy of Science book series (BSPS, volume 123)

If ever a major study of the history of science should have acted like a sudden revolution it is this book, published in two volumes in 1905 and 1906 under the title, Les origines de la statique. Paris, the place of publication, and the Librairie scientifique A. Hermann that brought it be enough of a guarantee to prevent a very different out, could seem to outcome. Without prompting anyone, for some years yet, to follow up the revolutionary vistas which it opened up, Les origines de la statique certainly revolutionized Duhem's remaining ten or so years. He became the single-handed discoverer of a vast new land of Western intellectual history. Half a century later it could still be stated about the suddenly proliferating studies in medieval science that they were so many commentariesonDuhem's countlessfindings and observations. Of course, in 1906, Paris and the intellectual world in general were mesmerized by Bergson's Evolution creatrice, freshly off the press. It was meant to bring about a revolution. Bergson challenged head-on the leading dogma of the times, the idea of mechanistic evolution. He did so by noting, among other things, that to speak of vitalism was at least a roundabout recognition of scientific ignorance about a large number of facts concerning life-processes. He held high the idea of a "vital impetus passing through matter," and indeed through all matter or the universe, an impetus thatcould be detected only through intuitiveknowledge.

'This volume is a notable addition to the growing literature on Duhem, and will be found invaluable by a wide range of readers.' Science and Religion Forum Reviews July 1992