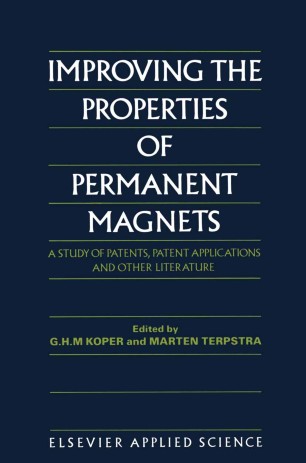 Improving the Properties of Permanent Magnets

A Study of Patents, Patent Applications and Other Literature

The present study complements the study on patents, patent applications and other literature on rare earth metals based permanent magnets by Frits Andriessen and Marten Terpstra, published by Elsevier Applied Science in 1989, and complements in part the book on Nd-Fe permanent magnets edited by LV. Mitchell, which was the result of a workshop organized by the Commission of the European Communities and held in Brussels on 25 October 1984. The difference between the content of the first book and that of the present study is that the first is more specifically directed to various kinds and compositions of alloys used in newly developed magnets, while the present book emphasises the improvements obtained when using particular alloys. The study edited by Mitchell deals more specifically with the economic, physical and chemical aspects of rare earth metals based magnet alloys, their properties compared with the more common and classical magnets such as ferro-cobalt alloy magnets, and their applications to various fields of technology. From the present study it has become apparent that there exist only a few patents and patent applications covering a specific use of particular magnets having specific properties to a circuit, arrangement, device or electric motor. This appears to be due to the fact that every manufacturer of such circuits or arrangements applying magnets naturally wants to employ the most effective magnets.