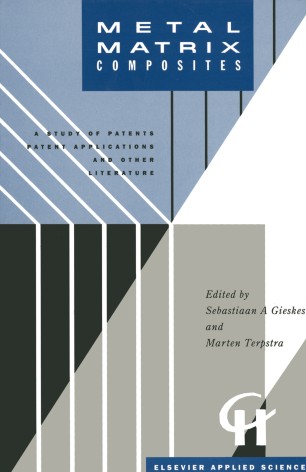 A Study of Patents, Patent Applications and Other Literature

The present study of patents and patent applications published in the United States, Japan and the countries of Western Europe, and of other technological about 1980, is the result of a comprehensive analysis literature published since of documents which reveal various processes for reinforcing composite materials by metals, the atoms of which have been arranged according to predetermined matrices. Pre-searches were conducted by the Patent Information Office of TNO in Rijswijk, The Netherlands, which also provided copies of the documents needed to carry out the analysis. The International Patent Classification System (IPC) was employed to determine proper entries to the documents on the respective subject-matter. These classes are: C 22 C 1/09 relating to alloys containing metallic or non-metallic fibres or filaments; by subjecting to pressure and heat an assembly comprising at /09B least one metal layer or sheet and one layer of fibres or filaments; /09C by contacting the filaments or fibres with molten metal, e. g. by impregnation; /09D by using a powder-metallurgical method; characterized by the material used respectively for the metal /09F matrix or the reinforcing fibres; matrix formed of a light metal such as AI, Mg, Be, Ti; /09F2 matrix formed of a refractory metal such as Ni, Co, Cr, Mo. /09F4 Classifying patents or patent applications is actually a very difficult matter, particularly when it has to deal with processes for the production of composites, metal alloys or pharmaceuticals.