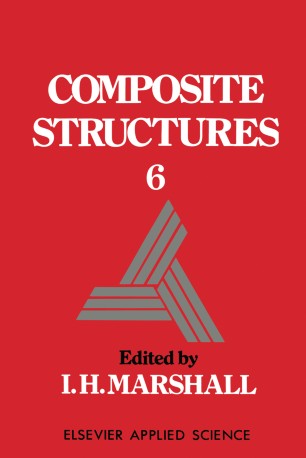 The papers contained herein were presented at the Sixth International Conference on Composite Structures (ICCS/6) held at Paisley College, Scotland in September 1991. The Conference was organised and sponsored by Paisley College. It was co-sponsored by Scottish Enterprise, the National Engineering Laboratory, the US Army Research, Development and Standardisation Group-UK, Strathclyde Regional Council and Renfrew District Council. It forms a natural and ongoing progression from the highly successful ICCS/1/2/3/4 and 5 held at Paisley in 1981, 1983, 1985, 1987 and 1989 respectively. As we enter the final decade of this century many organisations throughout the world are adopting a prophetic role by attempting to forecast future scientific advances and their associated impact on mankind. Although some would argue that to do so is folly, without such futuristic visionaries the world would be that much poorer. IntelJigent speculation based on research trends and historical advances, rather than fanciful theories, breathes a healthy air of enthusiasm into the scientific community. Surely this is the very oxygen necessary to ignite the fir~s of innovation and invention amongst pioneers of research.