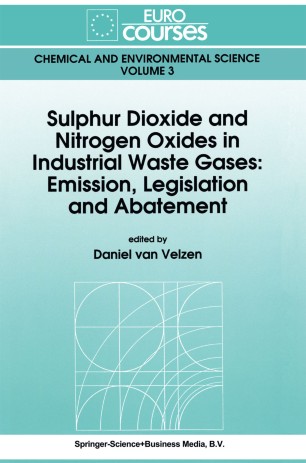 D. VAN VELZEN Commission of the European Communities, Joint Research Centre Ispra, Environment Institute, 1-21020 Ispra (Varese) ITAL Y 1. Introduction Worldwide, there is an ever increasing interest and concern about the destructive effects of air pollution on man's ecosystem. The growing awareness of these effects has revealed the need to take adequate measures to minimize the emission of air polluting products. The two most important contaminants, occurring in the largest concentrations and quantities, are sulphur dioxide and nitrogen oxides. Both pollutants are formed mainly during the combustion of fossil fuels, particularly by power stations and traffic. The effects of air pollution caused by these two contaminants have already been studied for several decades and measures to protect the environment against their adverse effects are now operative in many countries. The present volume contains the proceedings of a Eurocourse held in Ispra in September 1990. The course was meant to give an overview of present knowledge concerning the emission sources and quantities, to cover features of present legislation and to give a survey of the most important modern abatement techniques for S02 and NOx. It was mainly addressed to higher and medium management in the power, chemical and similar industries, particularly from those countries where the fight against air pollution is still in its infancy. Obviously, it was not possible to cover completely the whole range of subjects during the limited duration of a Eurocourse.