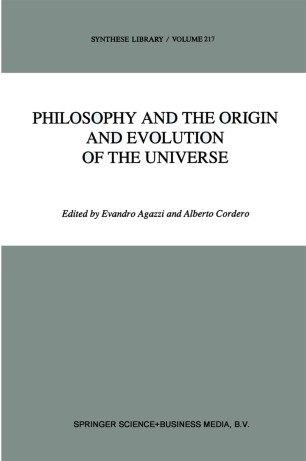 Philosophy and the Origin and Evolution of the Universe

It has often been noted that a kind of double dynamics char- terizes the development of science. On the one hand the progress in every discipline appears as the consequence of an increasing specialization, implying the restriction of the inquiry to very partial fields or aspects of a given domain. On the other hand, an opposite (but one might better say a complementary) trend points towards the construction of theoretical frameworks of great ge- rality, the aim of which seems to correspond not so much to the need of providing «explanations» for the details accumulated through partial investigation, as to the desire of attaining an - rizon of global comprehension of the whole field. This intell- tual dialectics is perceivable in every discipline, from mathe- tics, to physics, to biology, to history, to economics, to sociology, and it is not difficult to recognize there the presence of the two main attitudes according to which human beings try to make «intelligible» the world surrounding them (including themselves), attitudes which are sometimes called analysis and synthesis. They correspond respectively to the spontaneous inclination which pushes us to try to understand things by seeing «how they are made», in the sense of «looking into them» and breaking them into their constitutive parts, or rather to encompass things in a global picture, where they are accounted for as occupying a place, or playing a role, which are understandable from the point of view of the whole.

Alberto Cordero teaches philosophy at the City University of New York, Queens College. He is the author of numerous articles in philosophy of science. Besides his focus on quantum theory, his research interests include the history of the natural sciences, the relation between science and value, and the contemporary conception of nature and naturalism. Alberto Cordero is a founding member of the Institute for Philosophical Investigations at Lima University and several other scholarly societies and programs in Latin America.