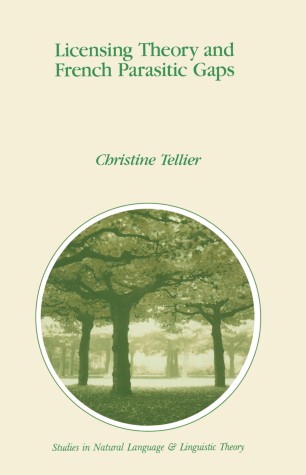 The study of parasitic gap constructions (e. g. these are the reports; which you corrected _; before filing _i) has been a very lively area of research over the last decade. The impetus behind this lies mostly in the margi­ nality of the construction. Clearly, the intuitions that native speakers have about parasitic gaps do not stem from direct instruction; hence, it is reasoned, such knowledge follows from the restrictions imposed by Universal Grammar. Furthermore, it is unlikely that any principle of Universal Grammar refers specifically to parasitic gap constructions; their syntactic and interpretive properties must instead follow entirely from independent principles. My own interest in the phenomenon was sparked a few years ago, when, in a novel, I came across a sentence like the following: Chait un armateur; dont Ie prestige _; reposait largement sur la fortune _;, 'he was a shipbuilder of whom the prestige was largely based on the wealth'. As the indices indicate, the interpretation of the French sentence is un­ ambiguous: both the prestige and the wealth necessarily pertain to the same individual. In this aspect, the sentence much resembles the English parasitic gap construction above: in the former case too, the comple­ ments of correct and file must corefer with the noun phrase heading the relative (the reports). Yet, there is an important difference between the two constructions. Verbs like correct and file subcategorize their com­ plements.