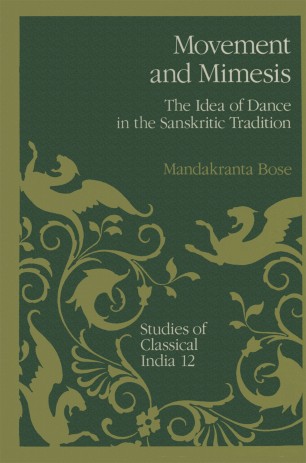 The Idea of Dance in the Sanskritic Tradition

The most comprehensive view of the evolution of dancing in India is one that is derived from Sanskrit textual sources. These texts are the basic material that students of the dance in India must examine in order to uncover its past. Since the rebirth of informed interest in dancing in early twentieth century, its antiquity has been acknowledged but precisely what the art was in antiquity remains unclear. Discovering the oldest forms of dancing in India requires, as do other historical quests, a reconstruction of the past and, again as in other historical investigations, the primary sources of knowledge are records from the past. In this case the records are treatises and manuals in Sanskrit that discuss and describe dancing. These are the sources that the present work sets out to mine. These texts taken collectively are more than records of a particular state of the art. They testify to the growth of the theory and practice of the art and thus establish it as an evolving rather than a fixed art form that changed as much in response to its own expanding aesthetic boundaries as to parallel or complementary forms of dance, drama and music that impinged upon it as India's social and political situation changed. When we place the Sanskrit treatises in chronological sequence it becomes clear that the understanding of the art has changed through time, in its infancy as well as in maturer periods.