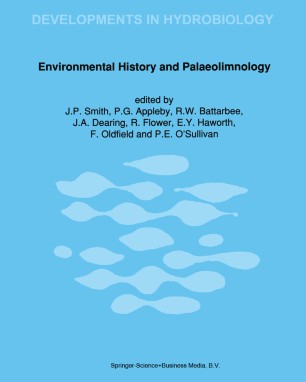 Proceedings of the Vth International Symposium on Palaeolimnology, held in Cumbria, U.K.

Part of the Developments in Hydrobiology book series (DIHY, volume 67)

The fifth International Symposium on Palaeolimnology was held at Ambleside in the English Lake District from August 31 to September 6, 1989. During the 65 papers were presented at seven sessions and 52 posters symposium displayed. Three late afternoon/evening special lectures were given, one of which was a memorial to the late Ed. Deevey, to whom this volume is dedicated. Associated with the symposium were five excursions to various parts of the UK and Ireland, and a visit to the laboratories of the Freshwater Biological Association and Institute of Freshwater Ecology. Conference participants were also invited to a buffet party and visit to the Lake District National Park Centre at Brockhole as the guests of the Park Authority. The local organising committee for the symposium also formed the editorial panel for this volume. They included: Peter Appleby, Rick Battarbee, John Dearing, Roger Flower, Elizabeth Haworth, Frank Oldfield, Paddy O'Sullivan and John Smith. Support for the conference is gratefully acknowledged from the following organisations; The Royal Society Department of the Environment US Army European Research Office Barclays Bank Central Electricity Generating Board Lake District Special Planning Board South Lakeland District Council Charlotte Mason College Molspin Limited The conference is also indebted to the many individuals who provided such effective help in the preparation and smooth running of the programme. J. P. SMITH May 1991 Hydrobiologia 214: 1-7, 1991.