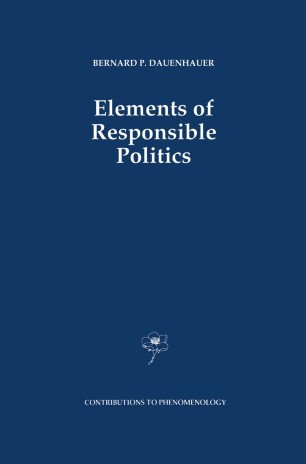 Part of the Contributions To Phenomenology book series (CTPH, volume 7)

This collection of essays draws together work done during a period of more than fifteen years. In the course of these years much has changed, including much about politics. Patterns of political activity have been trans­ formed. Ways in which we had been accustomed to construe politics have been substantially modified and sometimes replaced. Some apparently in­ tractable conflicts have been resolved. Other, apparently more manageable, conflicts have shown shocking durability. A number of political doctrines once considered indefinitely serviceable have lost all relevance. And the material and technical resources at our disposal look strikingly different than they did just a few years ago. Practical politics of whatever stripe encounters at every turn ever more grave environmental degradation. But, or so this collection assumes, not everything political has changed. Some political issues, both "theoretical" and "practical," remain persistently trenchant. Questions like the following demand ever renewed consideration. What is the point and worth of belonging to a political community? What entitlements and responsibilities follow upon such membership? Or even more fundamentally, what conditions are required for there to be politics at all? Taken together, the essays collected in this volume propose a way both to understand and to engage in politics which is properly responsive both to perennial political issues and to the peculiar exigencies of our era. Some of them present criticisms of widely held, warmly cherished ways of addressing political matters. Others propose constructive alternatives.