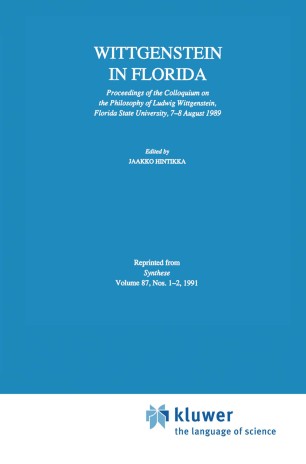 Proceedings of the Colloquium on the Philosophy of Ludwig Wittgenstein, Florida State University, 7–8 August 1989

Most of the papers appearing in volume 87 numbers, 1-2 are based on papers presented at the Colloquium on the Philosophy of Ludwig Wittgenstein held at the Department of Philosophy at Florida State University on 7-8 April 1989. We owe warm thanks to Florida State University for generously supporting this colloquium. The English translation of the chapter entitled 'Philosophie', from Wittgenstein's typescript number 213 (von Wright), appears here with permission of Wittgenstein's literary heirs, without affecting existing copyrights. The original German version of this chapter was edited by Heikki Nyman and appeared in Revue Internationale de Philosophie 43 (1989), pp. 175-203. Jaakko Hintikka's article (87, No.2) first appeared in a shorter form in The Times Literary Supplement No. 4565 (28 September to 4 October 1990, p. 1030). The present version appears with the permis­ sion of The Times Literary Supplement, which is gratefully acknowl­ edged. Our thanks are due to all the participants of the colloquium and the contributors to these special numbers.