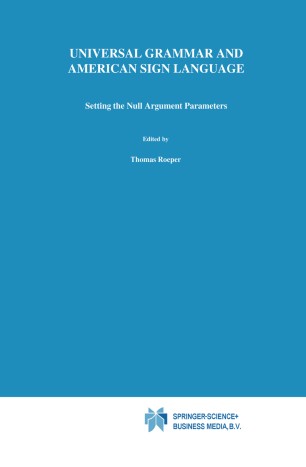 AMERICAN SIGN LANGUAGE American Sign Language (ASL) is the visual-gestural language used by most of the deaf community in the United States and parts of Canada. On the surface, this language (as all signed languages) seems radically different from the spoken languages which have been used to formulate theories of linguistic princi­ ples and parameters. However, the position taken in this book is that when the surface effects of modality are stripped away, ASL will be seen to follow many of the patterns proposed as universals for human language. If these theoretical constructs are meant to hold for language in general, then they should hold for natural human language in any modality; and ifASL is such a natural human language, then it too must be accounted for by any adequate theory of Universal Grammar. For this rea­ son, the study of ASL can be vital for proposed theories of Universal Grammar. Recent work in several theoretical frameworks of syntax as well as phonology have argued that indeed, ASL is such a lan­ guage. I will assume then, that principles of Universal Gram­ mar, and principles that derive from it, are applicable to ASL, and in fact that ASL can serve as one of the languages which test Universal Grammar. There is an important distinction to be drawn, however, be­ tween what is called here 'American Sign Language', and other forms of manual communication.