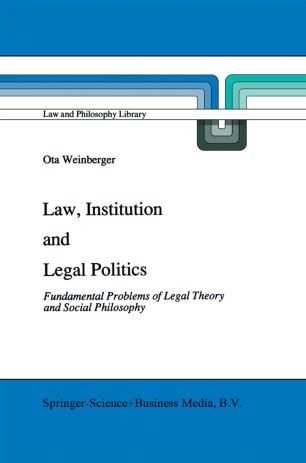 It gives me great pleasure to offer this foreword to the present work of my admired friend and respected colleague Ota Weinberger. Apart from the essays of his which were published in our joint work An Institutional Theory of Law: New Approaches to Legal Positivism in 1986, relatively little of Wein­ berger's work is available in English. This is the more to be regretted, since his is work of particular interest to jurists of the English-speaking world both in view of its origins and in respect of its content As to its origins, Weinberger war reared as a student of the Pure Theory of Law, a theory which in its Kelsenian form has aroused very great interest and has had considerable influence among anglophoone scholars -perhaps even more than in the Germanic countries. Less well known is the fact that the Pure Theory itself divided into two schools, that of Vienna and that of Brno. It was in the Brno school of Frantisek Weyr that Weinberger's legal theory found its early formation, and perhaps from that early influence one can trace his continuing insistence on the dual character of legal norms -both as genuinely normative and yet at the same time having real social existence.