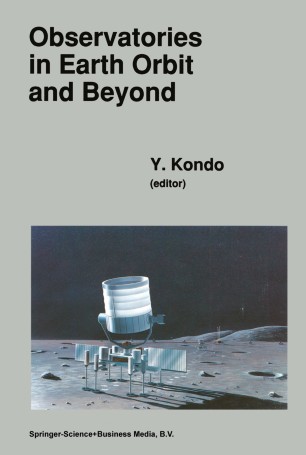 Observatories in Earth Orbit and Beyond

Proceedings of the 123RD Colloquium of the International Astronomical Union, Held in Greenbelt, Maryland, U.S.A., April 24–27,1990

When I became President of International Astronomical Union Commission 44 for the triennial period 1985-1988, several members of the Organizing Committee and I agreed that it would be a good idea for our Commission to host a conference on observatories in space in view of their increasingly important role in astronomi cal research. IAU Colloquium Number 123 "Observatories in Earth Orbit and Beyond" is the first colloquium sponsored by IAU Com mission 44 on Astronomy from Space, although Commission 44 has co-sponsored numerous colloquia and symposia in the past. The past two decades have seen a flourishing of astronomical observatories in space. Over a dozen orbiting observatories have opened up a new window on the universe, providing hitherto una vailable data in the electromagnetic spectral range from gamma-ray, X-ray, ultraviolet to infrared and radio. This has clearly demon­ strated the crucial nature of astronomical observations from space. The invited talks of present colloquium consist primarily of reviews of currently operating observatories in space, future observatories that have been approved by sponsoring government or space agencies, the launch systems of U.S.A., E.S.A., U.S.S.R. and Japan, discussions of various orbits and sites (such as the Moon), and alternate approaches in designing space observatories. Several panel discus­ sions addressed those issues as well as the major unsolved problems of astronomy. Contributed poster papers included descriptions of space observatories that are in planning stage.