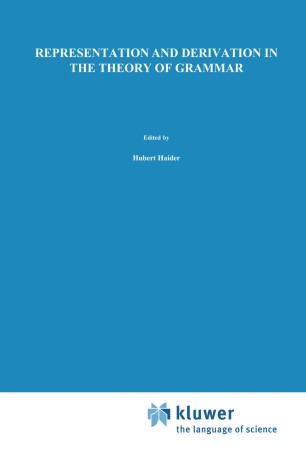 Representation and Derivation in the Theory of Grammar

Derivation or Representation? Hubert Haider & Klaus Netter 1 The Issue Derivation and Representation - these keywords refer both to a conceptual as well as to an empirical issue. Transformational grammar was in its outset (Chomsky 1957, 1975) a derivational theory which characterized a well-formed sentence by its derivation, i.e. a set of syntactic representations defined by a set of rules that map one representation into another. The set of mapping­ rules, the transformations, eventually became more and more abstract and were trivialized into a single one, namely "move a" , a general movement-rule. The constraints on movement were singled out in systems of principles that ap­ ply to the resulting representations, i.e. the configurations containing a moved element and its extraction site, the trace. The introduction of trace-theory (d. Chomsky 1977, ch.3 §17, ch. 4) in principle opened up the possibility of com­ pletely abandoning movement and generating the possible outputs of movement directly, i.e. as structures that contain gaps representing the extraction sites.