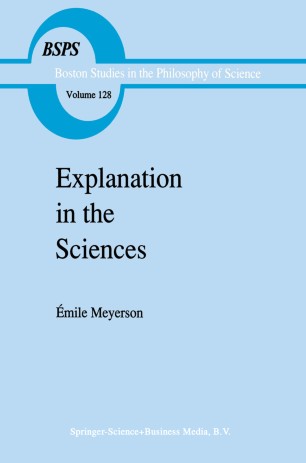 Explanation in the Sciences

Part of the Boston Studies in the Philosophy of Science book series (BSPS, volume 128)

Emile Meyerson's writings on the philosophy of science are a rich source of ideas and information concerning many philosophical and historical aspects of the development of modem science. Meyerson's works are not widely read or cited today by philosophers or even philosophers of science, in part because they have long been out of print and are often not available even in research libraries. There are additional chevaux de !rise for all but the hardiest scholars: Meyerson's books are written in French (and do not all exist in English versions) and deal with the subject matter of science - ideas or concepts, laws or principles, theories - and epis­ temological questions rather than today's more fashionable topics of the social matrix and external influences on science with the concomitant neglect of the intellectual content of science. Born in Lublin, Poland, in 1859, Meyerson received most of his education in Germany, where he studied from the age of 12 to 23, preparing himself for a career in chemistry. ! He moved to Paris in 1882, where he began a career as an industrial chemist. Changing his profession, he then worked for a time as the foreign news editor of the HAVAS News Agency in Paris. In 1898 he joined the agency established by Edmond Rothschild that had as its purpose the settling of Jews in Palestine and became the Director of the Jewish Colonization Association for Europe and Asia Minor. These activities represent Meyerson's formal career.