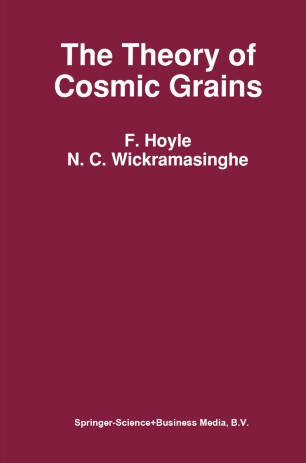 The Theory of Cosmic Grains

Light scattering and absorption by small homogeneous particles can be worked-out exactly for spheres and infinite cylinders. Homogeneous particles of irregular shapes, when averaged with respect to rotation, have effects that can in general be well-approximated by reference to results for these two idealised cases. Likewise, small inhomogeneous particles have effects similar to homogeneous particles of the same average refractive index. Thus most problems can be solved to a satisfactory approximation by reference to the exact solutions for spheres and cylinders, which are fully stated here in the early part of the book. The sum of scattering and absorption, the extinction, is too large to be explained by inorganic materials, provided element abundances in the interstellar medium are not appreciably greater than solar, H 0 and NH3 being essentially excluded in the 2 general medium, otherwise very strong absorptions near 3p,m would be observed which they are not. A well-marked extinction maximum in the ultraviolet near 2200A has also not been explained satisfactorily by inorganic materials. Accurately formed graphite spheres with radii close to O.02p,m could conceivably provide an explanation of this ultraviolet feature but no convincing laboratory preparation of such spheres has ever been achieved.