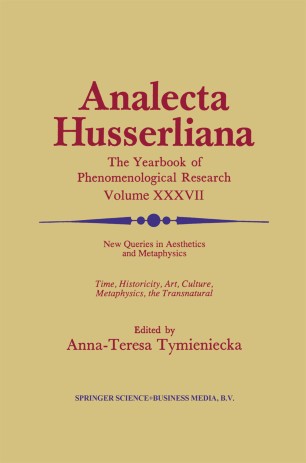 New Queries in Aesthetics and Metaphysics

Time, Historicity, Art, Culture, Metaphysics, the Transnatural BOOK 4 Phenomenology in the World Fifty Years after the Death of Edmund Husserl

This collection is the final volume of a four book survey of the state of phenomenology fifty years after the death of Edmund Husserl. Its publication represents a landmark in the comprehensive treatment of contemporary phenomenology in all its vastness and richness. The diversity of the issues raised here is dazzling, but the main themes of Husserl's thought are all either explicitly treated, or else they underlie the ingenious approaches found here. Time, historicity, intentionality, eidos, meaning, possibility/reality, and teleology are the main concerns of this collection devoted to studies in aesthetics, metaphysics and literary interpretation, written by such authors as, among others, R. Cobb-Stevens, C. Moreno Marquez, J. Swiecimski, Sitansu Ray and M. Kronegger. These original studies of phenomenological aesthetics and literary theory by scholars from all parts of the world were gathered by the World Institute for Advanced Phenomenological Research and Learn­ ing during the year 1988/89 during its assessment of the phenomeno­ logical movement, fifty years after Husserl's death. IX A -T. Tymieniecka (ed.), Analecta Husserliana, Vol. XXXVII, ix.