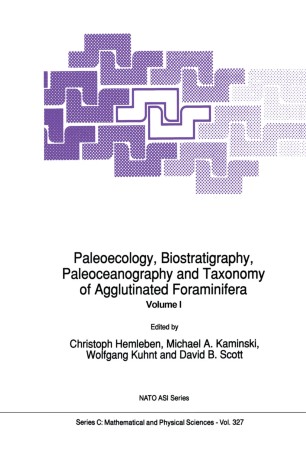 Agglutinated foraminifera are among the most widely distributed and abundant groups of marine meiofauna in some environments (e. g. marshes, deep-sea). They are tolerant of environmental extremes, tending to live where the evolutionarily more advanced calcareous foraminifera cannot survive. However, largely because of historical reasons, the amount of scientific effort invested in this group has been small in comparison to studies of other marine organisms. The NATO Advanced Studies Institute conference on the paleoecology, biostratigraphy, paleoceanography and taxonomy of agglutinated foraminifera in TUbingen September 17-29, 1989, was a direct outgrowth of two previous workshops on agglutinated foraminifers held in Amsterdam in September 1981 (IW AF I) and in Vienna in June 1986 (IW AF 11). As such, the TUbingen conference constitutes the Third International Workshop on Agglutinated Foraminifera (IW AF III) and was organised to provide a platform for synthesizing the current state of knowledge on this group of organisms, and to strengthen interactions between basic research and applied micropaleontology. One of the main underlying themes of the conferen:e was to identify topics in the paleoecology, biostratigraphy, paleoceanography and taxonomy of agglutinated foraminifera which are in urgent need of further research. About 80 scientists and students from 5 continents participated in the TUbingen conference, which is one measure of the growth in interest in agglutinated foraminifers over the past decade. During four days of technical sessions, scientific results were communicated in the form of 34 oral presentations and 15 poster displays.