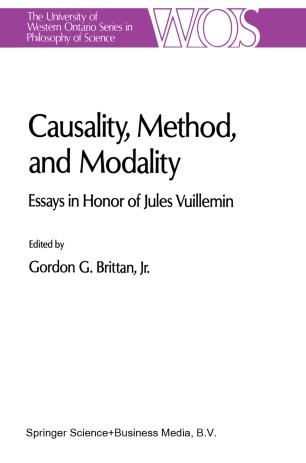 Essays in Honor of Jules Vuillemin

Part of the The University of Western Ontario Series in Philosophy of Science book series (WONS, volume 48)

Deservedly so, Jules Vuillemin is widely respected and greatly admired. It is not simply that he has produced a large body of outstanding work, in many different areas of philosophy. Or that he combines to an unusual degree rigorous standards with a very wide perspective. Or even that in his path-breaking accounts of algebra, of !)escartes, of Kant and of Russell, he showed in new and profound ways how the histories of science and philosophy could be used to illuminate each other. It is also that he has pursued the application of formal techniques and the defense of liberal institutions with a rare singlemindedness and courage. In a time and place where the former were generally ignored and the latter often attacked, he carried on, at some personal cost, embodying a traditional and ideal conception of the philosophical life, bridging national differences. Those who know him also treasure his friendship. Always curious, he delights in new facts and new experiences, and continually heightens the perception of those around him. Almost yearly, at the College de France he introduced brand new courses always with fresh and fruitful inSights. Exceptionally solicitous, he follows the lives of the families around him in great detail. The devotion of his students is legend. His personal energy is also legend. Many of us have followed him bounding up the stairs two at a time or through the gardens of the Luxembourg, his wit and irony apace.