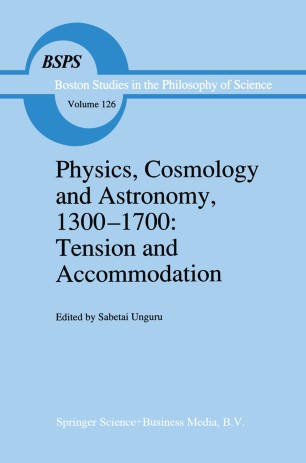 Part of the Boston Studies in the Philosophy of Science book series (BSPS, volume 126)

Habent sua Jata colloquia. The present volume has its ongms in a spring 1984 international workshop held, under the auspices of the Israel Academy of Sciences and Humanities, by The Institute for the History and Philosophy of Science and Ideas of Tel-Aviv University in cooperation with The Van Leer Jerusalem Foundation. It contains twelve of the twenty papers presented at the workshop by the twenty-six participants. As Proceedings of conferences go, it is a good representative of the genre, sharing in the main characteristics of its ilk. It may even be one of the rare instances of a book of Proceed­ ings whose descriptive title applies equally well to the workshop's topic and to the interrelations between. the various papers it includes. Tension and Accommodation are the key words. Thus, while John Glucker's paper, 'Images of Plato in Late Antiqu­ ity,' raises, by means of the Platonic example, the problem of interpreta­ tion of ancient texts, suggesting the assignment of proper weight to the creator of the tradition and not only to his many later interpreters in assessing the proper relationship between originator and commentators, Abraham Wasserstein's 'Hunches that did not come off: Some Prob­ lems in Greek Science' illustrates the long-lived Whiggish tradition in the history of science and mathematics. As those familiar with my work will undoubtedly note, Wasserstein's position is far removed from my stance on ancient Greek mathematics.