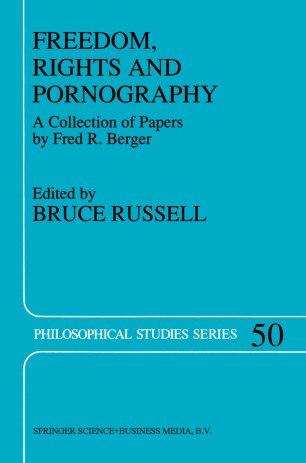 A Collection of Papers by Fred R. Berger

In the essays that follow, Fred Berger argues for freedom of expression, civil disobedience, affirmative action and what he calls liberal judicial activism and against sex-role stereotyping, paternalism and the censorship of pornography. Underlying his liberalism is a unified theory. That theory consists of a conception of rights, a theory of value and a theory of government. The conception of a right that Berger defends derives from J ohn Stuart Mill and is captured by what he calls "the rights­ formula": to have a right is to have important interests that society ought to protect as a matter of general rule (pp. 2, 7, 17-18, 19, 95). Since rights are to be protected by general rule, case-by-case consideration of consequences is ruled out (pp. 3, 18, 96) and neither modest increases in the general welfare, nor majority opinion, can justify the violation of a right (pp. 14-15; 17-18). Berger combines this view of the nature of a right with an objective theory of value according to which the important interests that ought to be protected are ones that people have "whether they know them or not, whether they desire that in which they have an interest or not" (p.