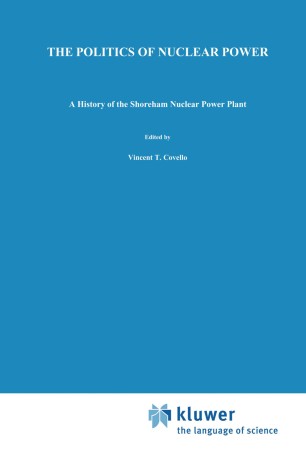 The Politics of Nuclear Power

A History of the Shoreham Nuclear Power Plant

Several individuals noted the potentially important civilian uses of atomic energy shortly after the bombings of Hiroshima and Nagasaki in 1945. That year J. Robert Oppenheimer told a national radio audience that "in the near future" it would be possible to generate profitable electric power from "controlled nuclear chain reaction units" (reactors). It was suggested that, after fIfteen to twenty-five years of development, mature nuclear technology could provide virtually inexhaustible, cheap energy given the abundance of nuclear fuel. Admiral Lewis Strauss, the Chairman of the Atomic Energy Commission, stated that atomic power would generate electricity "too cheap to meter" (A statement that, according to Brookhaven National Laboratories' physicist Herbert Kouts, immediately "caused consternation among his technical advisors" [Kouts, 1983: 3)). For a brief period it was thought that airplanes would fly using atomic power, and homes would install small nuclear reactors for heat and hot water. 1950s and early 1960s a small number of prototype nuclear In the reactors came on line in the United States. The first power plant protoype reactor began operation in Shippingport, Pennsylvania in 1957. It was followed by the Dresden 1 unit near Chicago in 1959, the Yankee plant in Rowe, Massachusetts (1960), and the Indian Point (New York) and Big Rock Point (Michigan) plants in 1%2. These five plants had a combined 800 megawatts (800 MW), or less than one generating capacity ofless than percent of the total American electricity generating capacity in 1962.