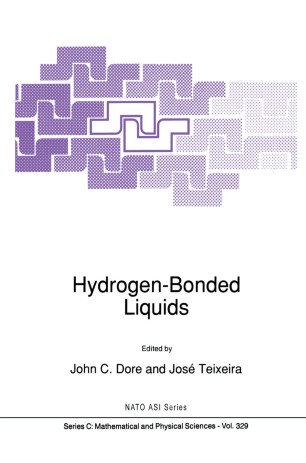 The study of liquids covers a wide range of scientific disciplines, primarily in physics and chemistry. As a result of this disparate activity the links between new developments in remote fields are seldom co-ordinated into a single conference. The objective of the present meeting was to gather together people with different forms of expertise. Previous ASI meetings on the liquid state have been held over an extended period and have occurred on a three-yearly basis. The first meeting in this series was on 'Structure and Dynamics of Liquids' in 1980 and was held on the island of Corsica. The next meeting on 'Molecular liquids: Dynamics and Interactions' was held in Florence in 1983 and was followed by 'Aqueous Solutions' at the Institut d'Etudes Scientifiques de Cargese in 1986. It therefore seemed a natural choice to select Cargese for the next meeting in 1989 and to choose a topic which emphasised a particular area of liquid state studies. Due to our own involvement in collaborative research we considered that 'Hydrogen-bonded liquids' would be an appropriate topic. One of its attractions, was that there was much new material coming from widely disparate investigations and it would be a convenient time to draw together the different strands. The particular interest in water was clearly central to this topic but it was thought desirable to set this development in the wider context of other systems in which hydrogen-bonding plays a significant role.