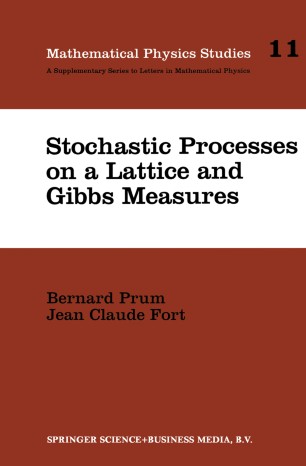 Stochastic Processes on a Lattice and Gibbs Measures

In many domains one encounters "systems" of interacting elements, elements that interact more forcefully the closer they may be. The historical example upon which the theory offered in this book is based is that of magnetization as it is described by the Ising model. At the vertices of a regular lattice of sites, atoms "choos e" an orientation under the influence of the orientations of the neighboring atoms. But other examples are known, in physics (the theories of gasses, fluids, .. J, in biology (cells are increasingly likely to become malignant when their neighboring cells are malignant), or in medecine (the spread of contagious deseases, geogenetics, .. .), even in the social sciences (spread of behavioral traits within a population). Beyond the spacial aspect that is related to the idea of "neighboring" sites, the models for all these phenomena exhibit three common features: - The unavoidable ignorance about the totality of the phenomenon that is being studied and the presence of a great number of often unsuspected factors that are always unquantified lead inevitably to stochastic models. The concept of accident is very often inherent to the very nature of the phenomena considered, so, to justify this procedure, one has recourse to the physicist's principle of indeterminacy, or, for example, to the factor of chance in the Mendelian genetics of phenotypes.