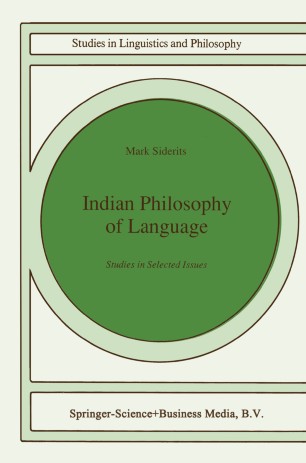 Part of the Studies in Linguistics and Philosophy book series (SLAP, volume 46)

What can the philosophy of language learn from the classical Indian philosophical tradition? As recently as twenty or thirty years ago this question simply would not have arisen. If a practitioner of analytic philosophy of language of that time had any view of Indian philosophy at all, it was most likely to be the stereotyped picture of a gaggle of navel­ gazing mystics making vaguely Bradley-esque pronouncements on the oneness of the one that was one once. Much work has been done in the intervening years to overthrow that stereotype. Thanks to the efforts of such scholars as J. N. Mohanty, B. K. Matilal, and Karl Potter, philoso­ phers working in the analytic tradition have begun to discover something of the range and the rigor of classical Indian work in epistemolgy and metaphysics. Thus for instance, at least some recent discussions of personal identity reflect an awareness that the Indian Buddhist tradition might prove an important source of insights into the ramifications of a reductionist approach to personal identity. In philosophy of language, though, things have not improved all that much. While the old stereotype may no longer prevail among its practitioners, I suspect that they would not view classical Indian philoso­ phy as an important source of insights into issues in their field. Nor are they to be faulted for this.