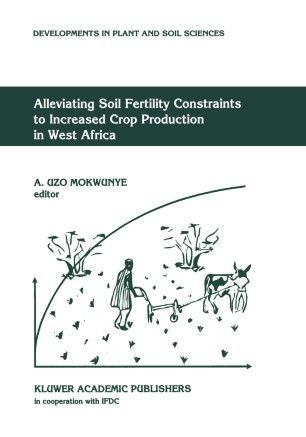 Part of the Developments in Plant and Soil Sciences book series (DPSS, volume 47)

Tropical Africa escaped from the glaciers that covered the temperate parts of the world during the Ice Age. The legacy is that most of the parent materials of the soils of tropical Africa are old, highly weathered and devoid of bases and phosphate-bearing minerals. Traditional farming systems which were relatively stable and sustainable relied on long fallow periods after one to two years of cropping to maintain the productive capacity of the soils. In recent times and especially in densely populated areas, a sizeable class of 'landless' farmers have begun to cultivate marginal lands or to invade the 'forest reserves' thereby exacerbating the problems of land and environ­ mental degradation. of soil fertility that will facilitate the production of adequate quantities of the principle Maintaining a level staples has become a major challenge to agricultural scientists in tropical Africa. To increase the nutrient­ supplying power of soils requires the inputs of fertilizers. These can be organic or inorganic. The efficiency with which these externally supplied inputs can increase agricultural production and reduce soil and environmental deterioration is dependent on the ability of scientists to determine the right types and quantities of the products to apply to each soil, crop and cropping system as well as the ability of farmers to acquire requisite farm manage­ ment skills.

' The book will be useful for persons interested in soil science, agronomy and other related disciplines and for everyone involved in problems such food security and fair income distribution. ' Agrochimica 36:3 1992
Buy options