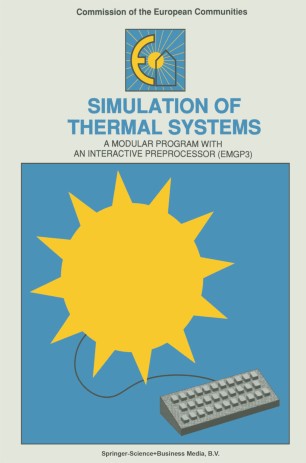 A Modular Program with an Interactive Preprocessor (EMGP 3)

The events leading up to the publication of this book started effectively in 1976 with the exchange of information between those modelling teams in Europe which were involved in the R&D-programme on Solar Energy of the Commission. When it became clear that the availability of experimental datafor model validation wm next to nothing, the Commission took the initiative to support in the frame of the Solar Energy R&D-programme the construction of Solar Pilot Test Facilities on eight sites in Europe. Each experimental facility consisted of two real solar heating systems with collectors, storage, controls, and msociated piping, but with the dwelling thermal distribution system replaced by a physical load simulator. One of the two systems on each site wm a reference system and wm identical for the eight participating teams. The simulator wm capable of producing a typical themalload for a house, interactive with the actual weather, and took into account the effects of the occupants. With datafrom these facilities not only were national simulation programs validated, but also the meanwhile commonly accepted modular structured European program EMGPl wm validated. EMGPl, which only could be run on a mainframe computer or under special conditions on a mini-computer,formed in tum the bmis for the development of EURSOL andEMGP3.EMGP3 is an improved userjriendly programpackagejorpersonal computers derived jrom EMGPl and includes a unique and user jriendly preprocessor.