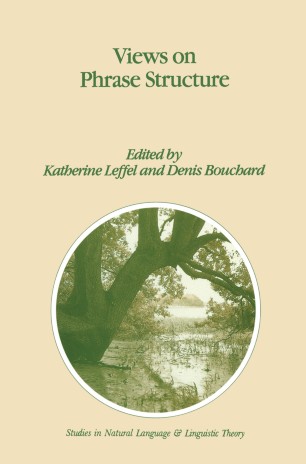 O. PRELIMINARY REMARKS Initial drafts of the papers in this collection were presented in a con­ ference entitled 'Views on Phrase Structure', held at the University of Florida, Gainesville, in March, 1989. Eleven of the twenty-three partici­ pants in the conference were able to contribute to this volume. The purpose of the conference was to explore theories of phrase structure in their relation to other subsystems of grammar and/or systems of nonlinguistic knowledge. Some of the grammatical subsystems which the authors consider are theta-theory, movement, Case, and binding; a number of papers address how the conceptual system and/or aspects of language use may interact. Unifying the various approaches and perspectives is an attempt to furnish hypotheses concerning prin­ ciples of phrase structure with some sort of independent justification. 1. PHRASE STRUCTURE THEORY: A BRIEF HISTORY A basic outline for a theory of phrase structure theory is accepted by all of the authors here; it is known as 'X-bar theory'. The concepts of X-bar theory are expressed in some form by a number of pre-generative linguists. For example, Bloomfield (1933) contrasted endocentric struc­ tures such as noun phrases and verb phrases with those he considered exocentric, e. g. prepositional phrases and clauses. Jespersen (1933), while presenting a functional system of description (in terms of 'ranks', where rank one is 'nominal', for example), clarified the relations among the head of a phrase, its modifier, and a phrase which modifies the modifier.