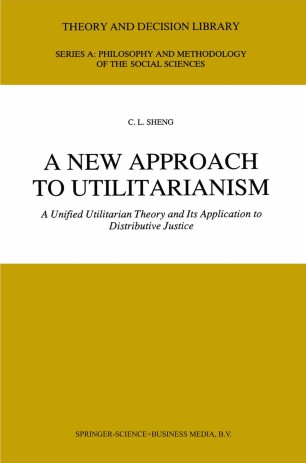 A New Approach to Utilitarianism

A Unified Utilitarian Theory and Its Application to Distributive Justice

1.1 Utilitarian Theories This book is a monograph on moral philosophy and social philosophy, particularly the part of the philosophy of economics that is related to the general distribution problem. It presents a comprehensive ethical theory, together with an application of the theory to distributive justice. The viewpoint of this theory is utilitarian. However, this theory is different in some crucial points, as well as in minor details, from all existing forms of utilitarianism. Moral philosophy deals essentially with the moral judgment of actions, i. e., whether a moral action is right or wrong, good or bad. The judgment is usually based on a line of logical reasoning, which can be traced to a final reason called the justification or ultimate principle. An ethical theory is a self-consistent system built upon a basic, or ultimate, principle. An ultimate principle can never be rigorously proven, and is not unique. Different philosophers establish different ethical theories upon different principles. Therefore, in the history of development of moral philosophy, there have been a large number of ethical theories and schools. Even wi thin the same school having the same ultimate principle, different philosophers may have different versions of the theory, because of small variations in the interpretation of the ultimate principle or in the elaboration of the details.