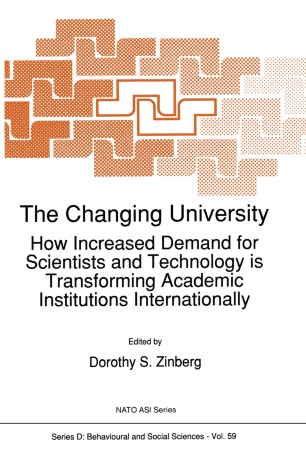 This collection of papers was written for a NATO Advanced Research Workshop held at Harvard University in March 1990. The title, "The Changing University and the Education of Scientists and Engineers: An International Workshop," broad as it is, does not convey the sweep of data, infonnation, opinions, and suggestions for future research and policy choices that were crowded into two-and-a-half days of fonnal presentations, mealtime discussions, and teatime chats. The proposal for the workshop grew out of a research project I had carried out that explored the policies governing the education of foreign science and engineering students (S&Es) in several industrialized countries, and of two countries that send large numbers of S&E students abroad - the People's Republic of China (PRC) and Japan (see chapter 7). In research visits to these countries as well as to France, the United Kingdom, West Gennany, and within the United States, I was struck by the similarity of issues that were raised. One was the concern that there would not be enough well-trained scientists and engineers to meet the constantly increasing demand for them. Government officials, industrialists, and educators repeatedly stressed that a well-educated and -motivated work force was essential for their economies, national security, and for society as a whole. Many of those interviewed mentioned that universities are undergoing rapid, systemic changes as governments and industry are calling on them to provide human resources and intellectual capital.