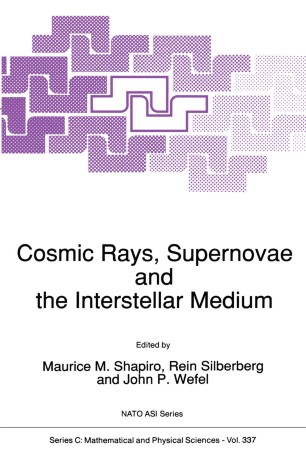 The Galactic cosmic rays have far-reaching effects on the interstellar medium, and they are, in turn, profoundly affected by the particles and fields in space. Supernova remnants and their expanding shock fronts pervade the Galaxy, heating the interstellar medium, and accelerating the cosmic rays. The interplay among the cosmic rays, the interstellar medium in which they propagate, and supernovae has been investigated for decades; yet these studies have generated as many enigmas as they have resolved. These puzzles continue to challenge observers and theorists alike. th This volume is devoted to selected lectures presented in the 7 Course of the International School of Cosmic-Ray Astrophysics in Erice, Italy in July-August, 1990. Alltogether, some 400 participants have attended the biennial sessions of this School since its inception in 1978. As its name implies, the School deals with cosmic-ray phenomena viewed in the broader context of astrophysics. Students and Lecturers are attracted from many astrophysical disciplines. Like earlier courses in this series, the present one was organized under the aegis of the Ettore Majorana Centre as a NATO Advanced Study Institute. Given the diverse scientific backgrounds of the students, it was deemed useful to include lectures at the introductory level. Other lectures and contributed talks were at a more advanced level, featuring new developments. If this collection is useful pedagogically, and if it provides some stimulus and information for the mature research worker, then the editors will feel well rewarded.

The book provides a useful introduction to the study of the aurora for the nonexpert reader. It should be particularly helpful to amateur astronomers and others who wish to make systematic observations of the aurora from the UK. Much background information on the solar-terrestrial environment has been included which provides a helpful insight into the auroral processes.
The Observatory