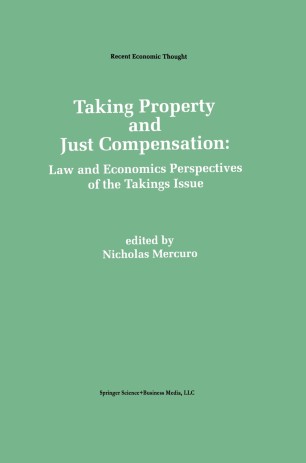 Law and Economics Perspectives of the Takings Issue

While much has been gained from the traditional legal scholars' doctrinal mode of analysis of the takings issue, this volume is presented in the belief that contributions from scholars from the various schools of thought that comprise Law and Economics can complement the traditional doctrinal approach to law. As the discipline of Law and Economics continues to advance, it remains heterodox; there are several vantage points from which to describe and analyze the interrealtionships between law and economics. It is hoped that the analyses from the several vantage points provided here will complement the prodigous body of existing doctrinal, legal analysis of the takings issue and deepen the understanding of the jurisprudential questions and economic issues surrounding the takings issue.
To this end, each contributor to this volume was selected as `representative' of one of the schools of thought comprising Law and Economics. In addition, each contributor was provided with a collection of recent United States Supreme Court cases (those summarized in Chapter 1 of this book) along with President Regan's Executive Order: The sole charge to each contributor was to conduct a legal-economic analysis of the cases and the President's Executive Order from the vantage point of their respective school of thought.