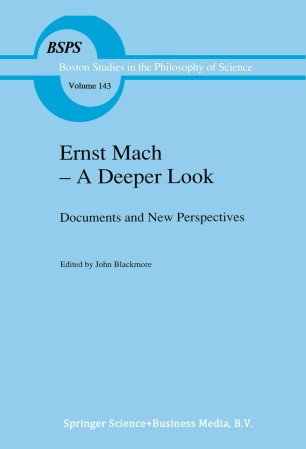 Part of the Boston Studies in the Philosophy of Science book series (BSPS, volume 143)

Ernst Mach -- A Deeper Look has been written to reveal to English-speaking readers the recent revival of interest in Ernst Mach in Europe and Japan. The book is a storehouse of new information on Mach as a philosopher, historian, scientist and person, containing a number of biographical and philosophical manuscripts publihsed for the first time, along with correspondence and other matters published for the first time in English. The book also provides English translations of Mach's controversies with leading physicists and psychologists, such as Max Planck and Carl Stumpf, and offers basic evidence for resolving Mach's position on atomism and Einstein's theory of relativity.
Mach's scientific, philosophical and personal influence in a number of countries -- Austria, Germany, Bohemia and Yugoslavia among them -- has been carefully explored and many aspects detailed for the first time.
All of the articles are eminently readable, especially those written by Mach's sister. They are deeply researched, new interpretations abound, and the bibliography includes recent works by and about Mach from over a dozen countries.
The book also contains many articles by or about Mach's contemporaries, including Ostwald, Dingler, Weichert and, especially, Einstein. Finally, and most intriguingly, the original ideas of Japanese scholars are presented, built on Mach's philosophy. These demonstrate how Mach's world view is currently contributing to the solution of contemporary philosophical problems.