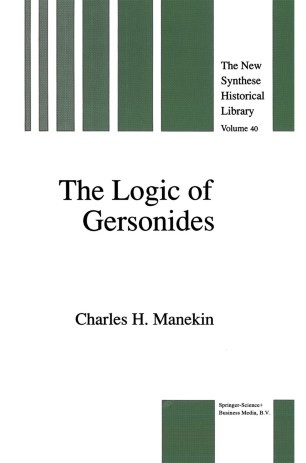 The Logic of Gersonides

A Translation of Sefer ha-Heqqesh ha-Yashar (The Book of the Correct Syllogism) of Rabbi Levi ben Gershom with Introduction, Commentary, and Analytical Glossary

In the great libraries of Europe and the United States, hidden in fading manuscripts on forgotten shelves, lie the works of medieval Hebrew logic. From the end of the twelfth century through the Renaissance, Jews wrote and translated commentaries and original compositions in Aristotelian logic. One can say without exaggeration that wherever Jews studied philosophy - Spain, France, Northern Africa, Germany, Palestine - they began their studies with logic. Yet with few exceptions, the manuscripts that were catalogued in the last century have failed to arouse the interest of modem scholars. While the history of logic is now an established sub-discipline of the history of philosophy, the history of Hebrew logic is only in its infancy. The present work contains a translation and commentary of what is arguably the greatest work of Hebrew logic, the Sefer ha-Heqqesh ha-Yashar (The Book of the Correct Syllogism) of Levi ben Gershom (Gersonides; 1288-1344). Gersonides is well known today as a philosopher, astronomer, mathematician, and biblical exegete. But in the Middle Ages he was also famous for his prowess as a logician. The Correct Syllogism is his attempt to construct a theory of the syllogism that is free of what he considers to be the 'mistakes' of Aristotle, as interpreted by the Moslem commentator A verroes. It is an absorbing, challenging work, first written by Gersonides when he was merely thirty-one years old, then significantly revised by him. The translation presented here is of the revised version.

`This is without doubt the best book available on any aspect of logic in the medieval Jewish world, and Manekin is to be thanked for bringing the difficult and yet rewarding logical ideas of Gersonides to the attention of the English-reading public.'
British Journal of History of Philosophy