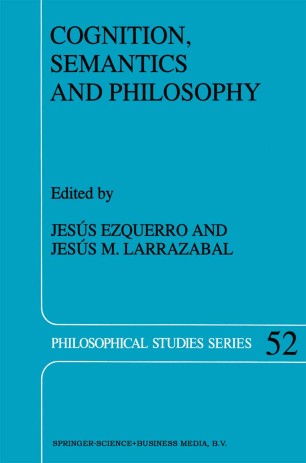 Proceedings of the First International Colloquium on Cognitive Science

THE PLACE OF PHILOSOPHY IN COGNITIVE SCIENCE During the last few years, many books have been published and many meetings have been held on Cognitive Science. A cursory review of their contents shows such a diversity of topics and approaches that one might well infer that there are no genuine criteria for classifying a paper or a lecture as a contribution to Cognitive Science. It is as though the only criterion is to have appeared in a book or in the programme of a meeting or title we can find the expression " . . . Cognitive Science" in whose name or something like that. Perhaps this situation is due to the (relative) youth of the field, which is seeking its own identity, still involved in a process of formation and consolidation within the scientific community; but there are actually deep disagreements about how a science of the mind should be worked out, including how to understand its own subject, that is, "the mind. "While for some the term makes reference to a set of phenomena impossible to grasp by any scientific approach, for others "the mind" would be a sort of myth, and the mental terms await elimination by other more handy and empirically tractable terms.