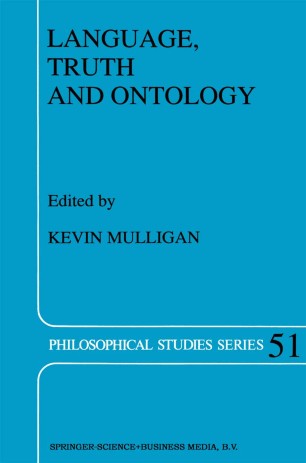 All except three of the papers in this volume were presented at the colloquium on "L'Ontologie formelle aujourd'hui", Geneva, 3-5 June 1988. The three exceptions, the papers by David Armstrong, Uwe Meixner and Wolfgang Lenzen, were presented at the colloquium on "Properties", Zinal, June 1-3, 1990. It was, incidentally, at the second of these two colloquia that the European Society for Analytic Philosophy came into being. The fathers of analytic philosophy - Moore and Russell - were in no doubt that ontology or metaphysics as well as the topics oflanguage, truth and logic constituted the core subject-matter of their "analytic realism", 1 for the task of metaphysics as they conceived things was the description of 2 the world. And logic and ontology are indissolubly linked in the system of the grandfather of analytic philosophy, Frege. After the Golden Age of analytic philosophy - in Cambridge and Austria - opposition to realism as well as the "linguistic turn" contributed for a long time to the eclipse of ontology. 3 Thanks in large measure to the work of some of the senior contributors to the present volume - Roderick Chisholm, Herbert Hochberg, David Armstrong and Karel Lambert - ontology and metaphysics now enjoy once again the central position they occupied some eighty years ago in the heyday of analytic philosophy.