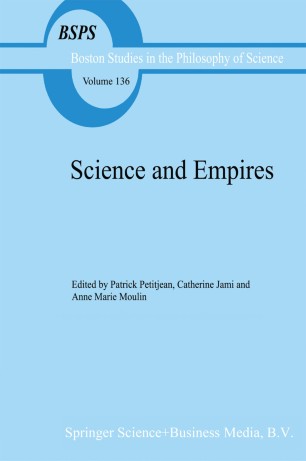 Part of the Boston Studies in the Philosophy of Science book series (BSPS, volume 136)

SCIENCE AND EMPIRES: FROM THE INTERNATIONAL COLLOQUIUM TO THE BOOK Patrick PETITJEAN, Catherine JAMI and Anne Marie MOULIN The International Colloquium "Science and Empires - Historical Studies about Scientific De­ velopment and European Expansion" is the product of an International Colloquium, "Sciences and Empires - A Comparative History of Scien­ tific Exchanges: European Expansion and Scientific Development in Asian, African, American and Oceanian Countries". Organized by the REHSEIS group (Research on Epistemology and History of Exact Sciences and Scientific Institutions) of CNRS (National Center for Scientific Research), the colloquium was held from 3 to 6 April 1990 in the UNESCO building in Paris. This colloquium was an idea of Professor Roshdi Rashed who initiated this field of studies in France some years ago, and proposed "Sciences and Empires" as one of the main research programmes for the The project to organize such a colloquium was a bit REHSEIS group. of a gamble. Its subject, reflected in the title "Sciences and Empires", is not a currently-accepted sub-discipline of the history of science; rather, it refers to a set of questions which found autonomy only recently. The terminology was strongly debated by the participants and, as is frequently suggested in this book, awaits fuller clarification.