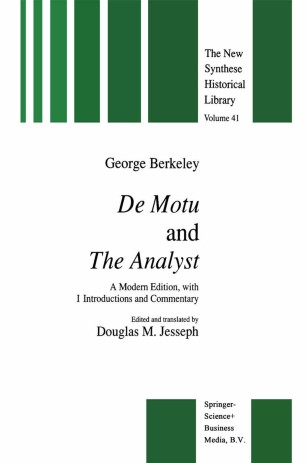 De Motu and the Analyst

A Modern Edition, with Introductions and Commentary

Berkeley's philosophy has been much studied and discussed over the years, and a growing number of scholars have come to the realization that scientific and mathematical writings are an essential part of his philosophical enterprise. The aim of this volume is to present Berkeley's two most important scientific texts in a form which meets contemporary standards of scholarship while rendering them accessible to the modern reader. Although editions of both are contained in the fourth volume of the Works, these lack adequate introductions and do not provide com­ plete and corrected texts. The present edition contains a complete and critically established text of both De Motu and The Analyst, in addi­ tion to a new translation of De Motu. The introductions and notes are designed to provide the background necessary for a full understanding of Berkeley's account of science and mathematics. Although these two texts are very different, they are united by a shared a concern with the work of Newton and Leibniz. Berkeley's De Motu deals extensively with Newton's Principia and Leibniz's Specimen Dynamicum, while The Analyst critiques both Leibnizian and Newto­ nian mathematics. Berkeley is commonly thought of as a successor to Locke or Malebranche, but as these works show he is also a successor to Newton and Leibniz.