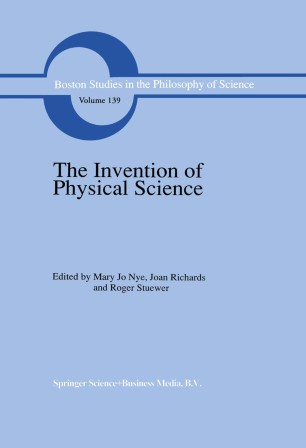 The Invention of Physical Science

Intersections of Mathematics, Theology and Natural Philosophy Since the Seventeenth Century Essays in Honor of Erwin N. Hiebert

Part of the Boston Studies in the Philosophy of Science book series (BSPS, volume 139)

Modern physical science is constituted by specialized scientific fields rooted in experimental laboratory work and in rational and mathematical representations. Contemporary scientific explanation is rigorously differentiated from religious interpretation, although, to be sure, scientists sometimes do the philosophical work of interpreting the metaphysics of space, time, and matter. However, it is rare that either theologians or philosophers convincingly claim that they are doing the scientific work of physical scientists and mathematicians.
The rigidity of these divisions and differentiations is relatively new. Modern physical science was invented slowly and gradually through interactions of the aims and contents of mathematics, theology, and natural philosophy since the seventeenth century. In essays ranging in focus from seventeenth-century interpretations of heavenly comets to twentieth-century explanations of tracks in bubble chambers, ten historians of science demonstrate metaphysical and theological threads continuing to underpin the epistemology and practice of the physical sciences and mathematics, even while they became disciplinary specialties during the last three centuries. The volume is prefaced by tributes to Erwin N. Hiebert, whose teaching and scholarship have addressed and inspired attention to these issues.