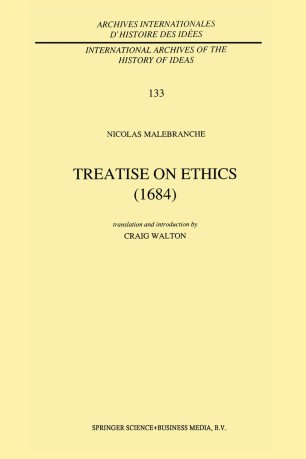 explanation might be understood in relationship to our mental, moral, and spiritual life, leapt to his attention and was to occupy it from that day until his death. II. MALEBRANCHE'S THEORY OF BEING His fIrst work, The Search After Truth, appeared from 1674-76, some fourteen to sixteen years after his dramatic encounter with Descartes' work; to this day it is the only work unfailingly associated with his name, though it was the first of nine studies and several volumes of responses in which he went on to explore and develop his thought. Malebranche criticizes the prevailing theories of sense perception, imagination, memory and cognition, and fIrst proposes his own theory of how we acquire and evaluate ideas - from mathematical to physical, and moral to self-reflective. Underlying this theory is his rejection of Scholastic Aristotelian metaphysics, in which particular beings are said to have powers or forms that act on our minds to inform us. Malebranche - here in company with other critics . of that metaphysics from Montaigne to Bacon and Hobbes - argues that the prevailing view of beings endowed with powers by which they act unilaterally, as "causes" in the full sense of that word, makes no sense and cannot be confirmed by experience. For Malebranche, on the other hand, power can be predicated univocally only of God. Created beings have only that limited power given by God under the conditions of creation.