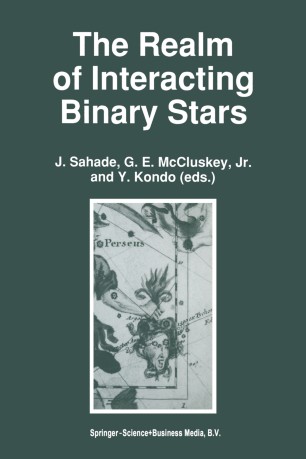 The Realm of Interacting Binary Stars

More than two centuries have elapsed since the story of the interacting binary stars began with the rediscovery of the variability of Algol by John Goodricke and the interpretation he proposed for explaining the regular periodic brightness variations which he found. Over this long span of time our knowledge about these systems has been growing, and we have now reached a fairly good understanding of the structure and behavior of this interesting group of objects. This book contains a timely summary of our present knowledge of interacting binary stars. The chapters have been written by distinguished scientists who have done relevant research in the field of interacting binary stars.

'The book contains good to excellent reviews on Magnetic activity in close binaries, Contact binaries, Symbiotic stars, Classical novae, Binaries with compact components, Polarized radiation from close binaries, and Formation of binary stars...I enjoyed enough of this book to recommend it to students of binaries. It well widen their knowledge' Space Science Review 69:3/4 1994