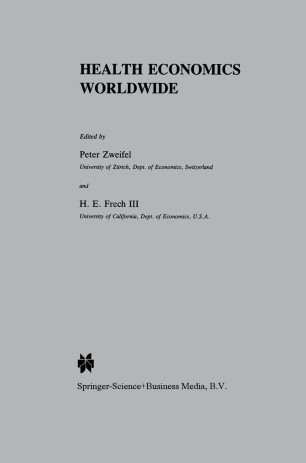 This volume reflects both the main issues confronting health economics and the state of the art in health economics a decade before the end of the twentieth century. It contains a selection from almost 150 papers presented at the Second World Congress on Health Economics, held at the University of ZUrich, Switzerland, 10-14 September 1990. This is ten years after the last Congress (held in Leiden, The Netherlands) and more than 17 years after the Tokyo meeting organized by the International Economic Associ­ ation (which might be called the First World Congress were it not for its small size and symposium-like character). Out of the 16 papers appearing in this book, only four were invited, and they were refereed like all the others. The remaining contributions are survivors of stiff competition. However, in spite of the large sample of papers we were able to draw from, certain gaps of coverage persist. In particular, environmental impacts on health were designated as a field of priority interest in the call for papers to this Congress. Yet, not even half a dozen contribu­ tions were submitted, which is remarkable in view of the intense interest of the public in the health effects of environmental degradation, ranging from noise level to ozone concentration. Another specially designed field was the political economy of health, dealing with the behavior of policy makers when deciding about changes in the health care systems. It did not attract as many contributions as we had hoped for or expected.